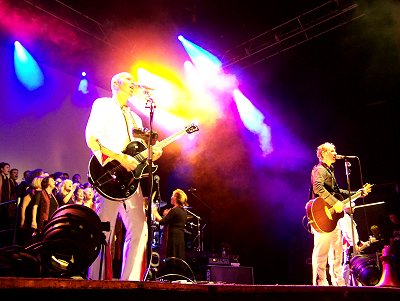 The Delirious? Christmas Show is always one of the highlights of the year, and this year was no exception. I'd been told before arriving that my pass from the recent UK tour would be valid for the Christmas show, so I arrived at about 4:15pm and knocked on the stage door around the back of the Shepherds Bush Empire. When the security guy opened the door I waved my pass at him, only to hear the words "That pass isn't valid any more". Good start. Thankfully he was one of the few helpful security guards that exist, and I was escorted inside to the security desk where he asked my name and checked me against his list. "You're not on the list". Things were going well. Half expecting to find myself back outside on the street with a sore backside, I was surprised when instead he picked up his phone and called tour manager Ian. "I've got a Dave Wood at stage door" he said, before listening to the response for a few seconds and hanging up. Good news or bad? I wondered. Sigh of relief as he reached for a bright red pass marked 'AAA' and handed it to me. 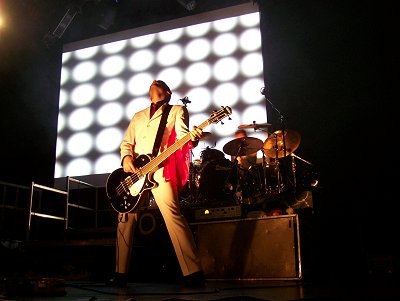 With the potential crisis averted, I became aware of the unmistakable sound of a Delirious? sound check in progress. Heading through the doors, down the steps, and through a few more doors I arrived onto side of stage, behind Trevor's mixing desk (monitor engineer). In front of me, in the semi-darkness (stage lights not yet in use) I could see Delirious? and a large choir assembled on stage. The choir leader/conductor was stood in front of the choir talking to them. "If you don't know the words just sing 'Rhubarb' or something. Whatever you do, don't turn around and look at the words on the screen or I'll shoot you" she said to them sternly. The band and choir rehearsed the moment when the choir will walk on during 'Majesty' and join in for the chorus. Next up, Delirious? practice a very rock and roll version of 'Hark The Herald', and then the sound check is finished. The band come to greet me and I wonder off upstairs to the dressing room with Jon. On the way we pass Matt Redman arriving through the stage door (unlike me, his name is on 'the list'). 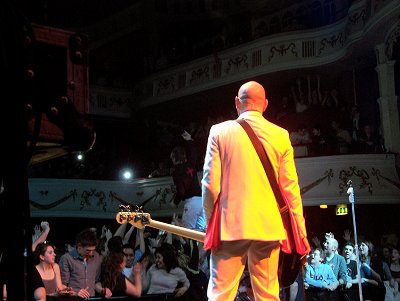 One thing that always impresses me about Delirious? is that they surround themselves with top professionals, especially when it comes to their crew. Tonight they have Neil on lights, who has just returned from shooting a TV series. Matt their sound man has just rushed back from doing the sound for Jarvis Cocker on this afternoon's recording of tonight's Jonathan Ross TV show. Another crew members has spent the day working with Natasha Bedingfield, also shooting a TV show. These aren't just guys the band found hanging around a street corner, they're all recognised experts in their field of work who actively choose to fit Delirious? into their busy schedules, packed full of big name mainstream artists. It says something about the level of professionalism that goes into a Delirious? show. Anyway, a little while later it's time to head to a restaurant for dinner. Once inside, the band are pounced on by an extremely enthusiastic fan who has come all the way from Italy just for tonight's gig. Despite the slightly unexpected intrusion, they pose for photographs without complaint before we all take up seats for dinner. Sat either side of me are Jon and Stew, across the table are Neil (lights) and Jamie (a journalist friend of Jon, who I'm told has plenty of dirt on him - so I happily take his business card when it's offered to me!). Over pasta and pizza we chat about various things. It amuses me to hear that Jon has just had his adapted suit (complete with bat wings) back from the dry cleaners (I bet the dry cleaner got a bit of a surprise when they cleaned the outfit). 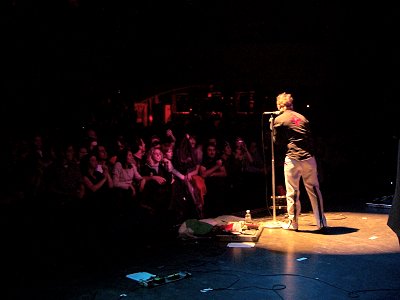 Back at the venue everyone gathers in the large room behind the stage for a pre-gig prayer meeting. The room is rather over crowded as the 30+ members of the choir, 5 members of Delirious?, Matt Redman and band, plus hangers on (like me!) gather together. Stu G says a few words, thanking everyone for coming to perform tonight and then looks over at Martin and says "So, what do we do now?". There's general laughter as people joke that Stu doesn't know how to pray. Stu responds with a story about the first band he was part of, many years ago, where he was the only non-Christian in the band and quickly had to learn how to talk like a Christian. Matt Redman quips that he must be talking about a band called "Cutting Edge" and more laughter fills the room. When things quieten down, Stu, Martin, Matt and a few others say prayers and then we file out of the room. On the way back to Delirious' dressing room, we again pass the stage door where Carrie and David Grant are just arriving. I see another familiar face behind them, who I'm fairly sure is athlete Jamie Baulch. 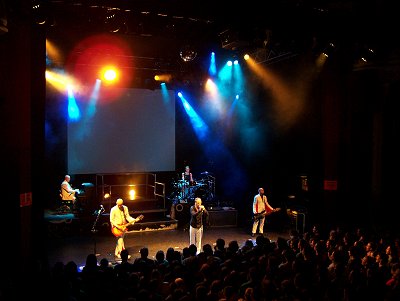 As we head upstairs to the dressing room, I pass Tom (tour manager Ian's right-hand mand) who stops me and says "Dave, would you like to fire a cannon tonight?". I ignore the pictures flashing through my mind of large black cannon balls flying off the side of a pirate ship, and focus instead on the confetti cannons that get fired to shower the crowd with millions of tiny pieces of paper, creating a fake indoor snowstorm. I happily agree, and arrange to meet Tom during the encore. In the dressing room the band start to ready themselves for the show. Setlists are looked over, Jon practices with his Bass and Stew hits his drumsticks against a practice pad on his knee. I'm amazed to find that Stew is an almost entirely self-taught drummer, having only had 2 lessons in his entire life "and they were a couple of years ago" he explains. I leave the band in the dressing room and head onto the side of the stage to watch the end of Matt Redman's support set. He's doing well and the crowd are very receptive.

Finally it's time for Delirious? to perform. I crouch down in the security pit between stage and crowd and take as many photos as I can for the first few songs, before heading again to the side of stage to take some photos looking out from behind the band out onto the crowd. Then it's up into balcony level 1 for some more photos. Later as I stand just off the side of the stage, I notice Matt Redman sitting on the floor, watching Delirious? and singing along to 'Our God Reigns'. Before I know it, the band leave the stage for the encore break so I dash off to find Tom. He hands me a clear plastic tube, about a metre in length, stuffed full of tiny pieces of paper. He gives me a few instructions and then we head off, along with several other cannon wielders, up the back stairs to balcony levels 2 and 3. He sends each of us off to a different part of the balcony so that we are arranged all around the perimeter, and then we wait for our cue.

Delirious? come back on stage to sing All This Time followed by Stronger, and then their final Christmas number, Hark The Herald Angels Sing. Mid way through the song we all pull the release cord on our confetti cannons and a cheer goes up from the crowd as the confetti fills the venue and floats down on everyone from high up in the roof. I pull out my camera again quickly to take some photos of the scene, before the show comes to an end. With everything finished I catch up with the band again in the dressing room, and then follow Jon down to the after show party where friends, family and colleagues are gathered. It was a stunning night. My only regret was not being able to stay for longer at the after show party, but as it was I didn't get to bed till 2am after the train journey home - and then got woken at 6am by my daughter, so I think it was just as well I left when I did!