Last night was the 10th, and almost certainly final ever, Delirious? Christmas Show. I've had the incredible privilege of being at all 10 of the shows, and whilst the venue has sometimes moved around London it has mainly been, as it was last night, at the Shepherds Bush Empire. I've actually seen Delirious? perform there 11 times now and it has always been one of my all time favourite venues. Yesterday was no exception, from the minute I arrived I instantly felt the sense of excitement and buzz of expectation from the incredibly long queues of fans which stretch from the front door, right round the block in both directions. I hadn't been able to arrive at the venue as early as I usually do, so it was 7pm by the time I walked in the stage door to be met by Jon. We walked up the stairs to the dressing room where I was thrilled to bump into a familiar old face. Most people will remember that until a few years ago, a man named Tony Potato was the bands manager. He left to move to the USA and pursue another job in the music industry, so it was great to see him back at a Delirious? concert again. 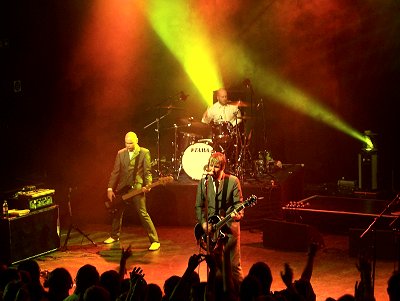 In the dressing room the crew seemed fairly relaxed and Jon took me into a side room, along with Craig Borlase (author of all written things d: related), to watch a first edit of the new DVD that the band recently recorded in Colombia. The band's visuals man, Andy Hutch, is currently holed away in a dark location helping to edit the footage, and had sent over an early version for the bands feedback. From what I saw the DVD looks sure to be immense. There are a superb range of camera angles, plenty of shots from within an invariably camera-wielding crowd, lofty shots over the huge arena, and great on-stage close ups of the band and their instruments. There is some excellent fast paced edits in Rain Down to match the punchy drum beat, a nice Martin solo, and plenty of Spanish to add a sense of authenticity. 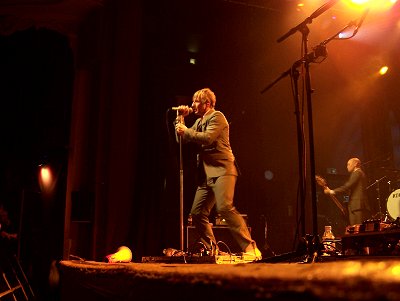 Leaving the band to get ready for the show, I headed back down stairs to the stage to watch the end of support band Bluetree's set. They were in the middle of performing their very own version of Joy To The World when I looked to my side and realised I was stood next to Stew Smith. We said a quick hello before he dashed out to find his seat for Delirious' set. As the crew began the change over between acts, acting tour manager Mark asked me do a favour. As we stood on the stage he pointed at the front of house sound desk, mid way through the crowd, where he'd spotted the white cushion from Martin's Kingdom Of Comfort armchair. Somehow it had found its way off the stage and onto the sound desk. He asked if I could retrieve it and bring it back to the stage ready for the band's imminent arrival. 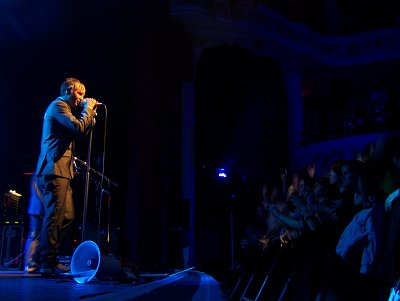 Taking a short cut through the side passages, I made quick progress to the back of the venue, only to be confronted with a solid wall of people between me and the sound desk. Walking against the flow I pushed and squeezed through the crowd until I finally made it to the sound desk. I grabbed the cushion only to be confronted by the camerman who had inadvertently stolen the crucial prop to soften his seat for the duration of the show. Once I explained why I was removing his luxurious seat cover, he apologised rather sheepishly, apparently realising for the first time that what he had presumed was just a discarded cushion was in fact a critical part of the stage show! 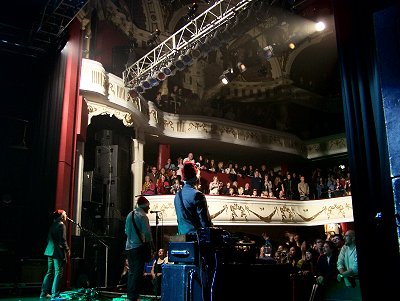 I made it back to stage with the cushion, where it was quickly placed on the arm chair in the center of stage, ready for Martin's start position for the show. Minutes later the band appeared in the wings, the lights went down and out they marched to get the show started. I headed back to front of house to take up position in the pit, untroubled by a very relaxed seeming security. The stage is really low at SBE, so taking photos from the pit basically involves crawling around on your hands and knees so as not to have your head sticking up too far and obscuring the view of the crowd. As Martin did his usual trick of climbing into the crowd, Mark came leaping off the stage, over my head, and rushing to Martin's rescue as he attempted to climb back on to stage. 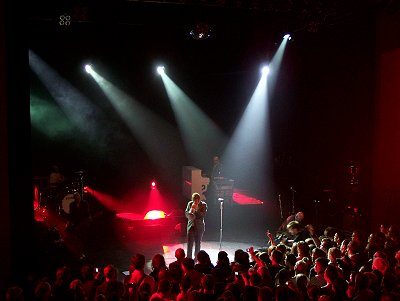 Next I headed upstairs to the first level balcony, which affords a superb view of the stage with its side over hang almost level with the front row. The shots from there came out particularly well, aided by the great job Ed was doing with the evening's light show. The spots really stand out well when you're a bit higher up, cutting through the darkness with a triangular beam of light (see above). I returned to my favoured position on stage, next to Trev at the monitors desk (see below), to watch the show and snap a few photos from just next to Tim's keyboards. As I contemplated where to position myself for the finale, noted on the setlist simply as 'My Soul Sings - snow', I decided against my usual tactic of high up in the balcony looking down on the snow storm, and instead made my way behind the stage round to the far side where Jon and Paul stand. 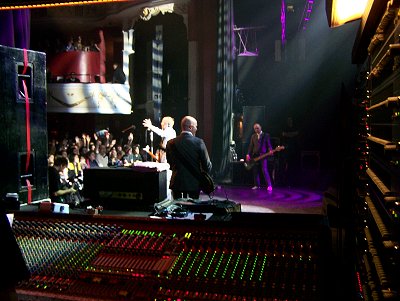 Midway through My Soul Sings, the snow machine erupted, pelting snow from the stage all over Martin and into the front few rows of the crowd. I took as many photos as I could, looking out on the crowd from behind Jon, aware that most of them would come out as nothing more than a blur, but hoping that at least one would be clear enough to use. (Thankfully a couple of shots were just about ok - see one of them below). With the show over, I bumped into Jon as he was heading back up to the dressing room. With only 30 minutes to get across London to catch a train home I couldn't hang around for the after show party this time, so I said a quick goodbye, and made my escape out of the stage door before the crowds poured out of the front door. It may well turn out to have been my last visit to the incredible Empire. The atmosphere inside is always superb, the place feels historic and the views and access to wonder around are brilliant. But most of all, the memories of all the times I've seen Delirious? perform on that stage will last with me forever. 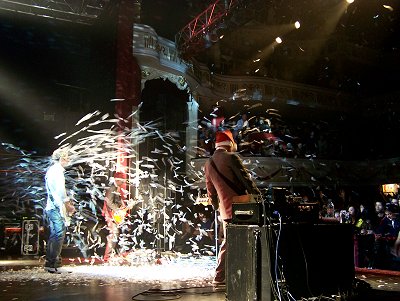