We arrived on site at Wiston House in West Sussex for The Big Church Day Out and collected our tickets and passes before heading straight to the main stage. I say 'we', because this was a family outing. As well as my wife, I was accompanied for the first time ever to a Delirious? concert by my two kids, aged 2 and 4. It was the perfect opportunity to let my children experience a concert. An all-day festival in the open air, with entertainment and activities aimed at every age range. So with much excitement and with the cries of "are we nearly there yet" finally over, we had arrived. 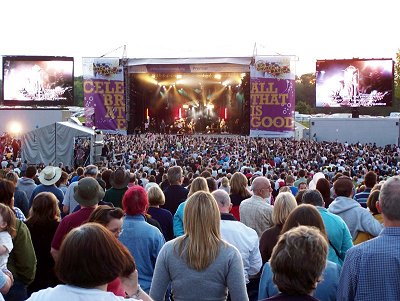 Main stage at Big Church Day Out
The size of the crowd already watching YFriday was incredible. The crowd in front of the stage seemed to stretch out endlessly onto the grassy hill that overlooked the site. In the distance we could see the grand old Wiston House itself, surrounded by tents and marquees, full of people jostling to get a view of whatever activities they hosted. While my wife took the kids off to investigate the 'Tiddlywinks Gym Tent' I made use of my press pass to enter the old House where the artists Press Conference was taking place.

Crowds in front of Wiston House
After being directed through the grand entrance to the house by some exceptionally polite and helpful staff, I found myself in an old fashioned library with walls lined with book shelves, wooden carvings, statues and impressive paintings. Israel Houghton was just coming to the end of his press conference, and I joined the dozen or so other members of the 'press' waiting for the arrival of Delirious? After a while the bands tour manager Ian arrived to apologise for the delay. Apparently he'd lost Martin and Tim. Eventually the band arrived, minus Tim who understandably had plenty of demands on his time as overall organiser of the whole event. 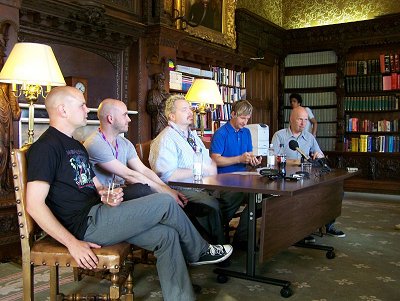 Delirious? press conference
Jon, Paul, Martin and Stu sat down around a table at the front of the room alongside Cross Rhythms presenter Mike Rimmer who was hosting the press conference. The band spent twenty minutes answering questions from the waiting 'press' on the highlights of their career and plans for the future. It was a fairly light hearted affair, but with quite a few uncomfortable silences as the band seemed almost reluctant to analyse themselves in what is clearly still a sensitive time for them all. It was interesting to hear StuG reveal that he now has his own manager to help handle his future career, which will include plenty of collaborations with other artists. They all expressed a keen desire to remain involved in music in some form or another, and insisted that whilst Delirious? were ending, the spirit of what the band has stood for all these years will live on. 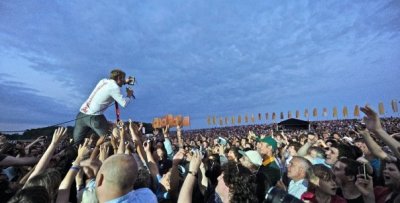 Martin in the crowd (Photo by gilgen.marc@gmail.com)
Martin also confirmed that there would be cameras at their final London show in November, to record the concert for a release some time next year. "We couldn't not record it" he said. With the questions over, the band posed for a few photos and Jon came over to chat with me before they headed off to do an interview with God TV in another room. I went back outside to join up with my family again, where we watched Cathy Burton and then Lou Fellingham at the superbly titled Tea Tent stage. I was surprised to see Stew Smith introducing them on stage to the smaller crowd who were lounging around on the grass around this side stage. Turns out he also had a major hand in the graphic design for the event, including producing the programme and event logo. Seems he has had a very busy year since leaving Delirious? 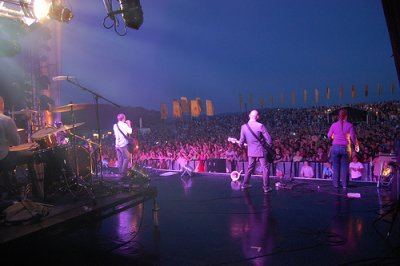 Delirious? on stage (Photo by Dave Johnson)
Over on main stage again we watched Michael W Smith's set, which got the older members of the crowd singing and dancing, while the younger ones at the front took a breather. Finally it was time for the main event: Delirious? Normally I would be crouching in the photographers pit and lurking in the wings of the stage at this point in a concert, but having my family with me I made a conscious effort to stay at the back of the crowd, enjoying the show with them for a change. It did feel a little strange not to be dashing around with a camera, getting shots of Martin as he clambered onto the shoulders of the fans at the front. But it was certainly a lot more relaxed! 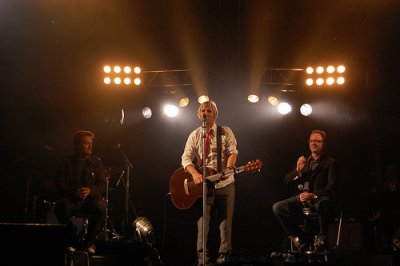 Michael W Smith, Martin & Graham Kendrick (Photo by Dave Johnson)
As Delirious? worked their way through the set, a stunning red sunset could be seen in the distance behind the stage, and darkness started to fall. This made the sight of the stage, emblazoned with lights, and the huge sea of people gathered in front of it, a truly impressive view from where we stood at the back. A mid-set appearance from Graham Kendrick and MWS to join Martin and Stu in the CompassionArt song 'So Great' was a nice touch. As the night drew to a close, it made me realise just how little time there is before the band comes to an end. Their farewell tour will be upon us all too soon.