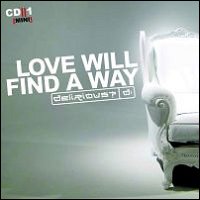 Last week Delirious? released what will be their final ever single, Love Will Find A Way. On Sunday it entered the official UK singles chart at number 55. Is that good or bad and who even cares? That's the debate that has been going on, in my head at least. So, having spent a few days thinking about it, here's how I see it.

About 6 weeks ago I was sitting in a restaurant in Brighton with Jon, Paul and StuG when Jon told me the news that they were releasing one last single. I have to admit I was pretty surprised. During the previous few months a debate had been raging on the d:Forum about the possibility of the band releasing another single. The fans song of choice was Love Will Find A Way. In an act of fabulously poor foresight I responded saying it was a ridiculous suggestion and would never happen. My main argument was that the whole point of releasing a single was to help promote a band, gain new exposure and draw attention to whatever the band did next. With the knowledge that Delirious? would be coming to an end within the next 12 months, the idea of releasing a single only to be seen and heard no more a short time after seemed, well, quite frankly it seemed pointless.

Added to that argument was the evidence from the previous Delirious? single, Paint The Town Red which charted at number 56 in 2005, that d: fans just don't have the same passion for getting the band into the charts that they did at the height of d:'s chart successes in the late 1990s. Back then it was still a new phenomenon to get an openly Christian band into the charts, and the fans revelled in the underground status of a band who relied on word of mouth and a sense of united belief and ambition. For a period of 4 years every Delirious? single charted inside the Top 40, with 4 of them inside the Top 20. But then things started to change. I think people in general just don't care about the charts as much now. It used to be the only way a band could be recognised as successful and get themselves heard of. But in our modern culture of websites and internet downloads, a band can do quite well without the help of the relatively old fashioned music charts thank you very much.

Anyway, back to Love Will Find A Way. Whilst I couldn't agree more with the choice of song - if any track on Kingdom Of Comfort was going to be released, that was the track the majority of people would pick - I just couldn't get my head around why Delirious? would release a single at this point in time. That was why I had argued that it was unlikely to happen - there seemed to be no logical reason for doing so, and every reason not to. So when, in that restaurant in Brighton, Jon first revealed the plans to me I was stumped. It wasn't so much the fact that my arguments that it would 'never happen' had all just been proven wrong, it was that underlying question of 'why?'. So I asked. Jon told me the decision had come from their record label who felt there was a great enough demand and passion from the fans for one final push at the charts. That I could understand, having seen the debate on the d: forum. But my next question was, what happens if the single is a huge success, would the band really be prepared to quit just as things start to go big? Jon's answer to that was basically to say that the decision had been made, and it was too late to change it now. So, no matter how successful the single might be, the band would still cease a year later.

So, Love Will Find A Way was released. The one thing that did really impress me about the single was the range and availability of the product. It seems the band had done a lot to encourage multiple sales, and make it easy for people to buy the single. Three physical versions of the single on CD, ordering from your phone, buying online, downloading online. Every base was covered. But somehow it wasn't enough. The chart placing was number 55 and although you can put a positive spin on that and say it's still good considering the lack of backing from the media and all the usual sources, the reality is that it's a disappointment. So here is my analysis of what went wrong.

This isn't intended to be a blame game and I'm not writing this as an 'I told you so' or even a 'I knew this would happen', because in the weeks leading up to the single I really started to believe it might chart well. But looking back now, there were some problems. I've heard quite a few fans say that band didn't seem to promote the single enough. At some gigs they didn't even mention the single, or it was mentioned before the show instead of at the time the song was played, and some said that when the band did mention the single they seemed almost embarrassed to be talking about it. I'm not saying those opinions are right or wrong, but if that was the perception of some fans, then it amounts to a problem. Maybe the band just didn't seem to be 'into it' enough, and that failed to excite the fans. Then there's the record label side of it. Maybe it was the wrong decision to release the single at all. Maybe the single itself wasn't good enough. It's easy to say this after the event, and baring in mind it was a section of fans themselves that were calling for this particular song to be a single, but maybe it was the wrong choice. As others have pointed out, what was really new about this single? Every fan already has the song itself having bought the album some 7 months earlier, and whilst there are a few b-sides on the single, they aren't new songs. Perhaps if the material had been entirely new it would have been more of an incentive for people to buy it.

Then there are the fans. It could be argued that if they really believed in what Delirious? were trying to achieve, and if they cared enough about the band and the cause, more of them would have gone out and bought the single. Maybe there was too much complacency, too little loyalty and just a lack of interest. Sometimes I feel that Christian music fans like to talk the talk, but when it comes to turning it into actions they can be found wanting. I'm not saying every fan should have bought the single or they're a bad person. But how many of them joined the clamour for a new single, then when it was granted they didn't bother to go out and buy it? Maybe I'm doing those people an injustice, and I do admit to feeling guilty even writing this post. I think the truth is that the band, the record label and the fans all have to shoulder some of the blame for this single not doing better. But blame doesn't achieve very much, and in the grand scheme of things does it really matter?

Almost certainly not. So, I can either delete this post and keep the analysis and thoughts to myself. Or I can hit the 'publish' button and present this with an apology. I'm sorry that I feel disappointed. I'm sorry that I've been more critical than I normally would be. But thank you, everyone, for the opportunity to have one last chance. Not many bands listen to fans as well as Delirious? do, and not many fans care about the band they love as much as d: fans do. I think when the dust settles and people look back over the many years of Delirious? history, the things that will stand out as important are not disappointing chart positions, but lives changed, people reached and a difference made.