The NEC Arena in Birmingham is one of the most well known music venues in the UK, frequently hosting the biggest bands in the world. So to see Delirious? play there was a real treat. On arrival I went to collect my pass from the box office where the very kind box office lady offered to personally escort me to the backstage area. How's that for service! She led me passed several security guards, darkened corridors and closed doors before we arrived outside another door labelled "Delirious? Dressing Room". Inside Stu, Stew, Tim and a few crew members were relaxing on the sofa with an impressive buffet lunch laid out on one side. Just then my phone rang. The display said "Jon Thatcher". Simultaneously the dressing room door opened and Jon walked in, phone to his ear "Hi Dave, where are you?". "I'm in your dressing room" I replied as we made eye contact. 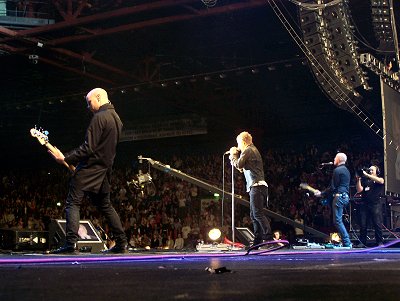 Jon and I went off to find a quieter room to talk shop, and we discussed the new Delirious.co.uk website and a few of their plans for the new album. Without wanting to give too much a way, I can honestly say the band have some very exciting plans for the future, and a very fan-focused approach to their new website. Back in the dressing room Stu's laptop was playing REM's 'Everybody Hurts' - probably the reason that later in the evening Martin burst into the same song whilst performing Majesty on stage! The concert tonight was being broadcast live on God TV and having not played a show in 2 weeks, and with only a very limited opportunity to sound check first, the band were perhaps understandably a little wary. Lee the guitar tech delivered Stu and Jon's guitars to the dressing room, and Stew's drum sticks and practise pad, for a little pre-gig warm up. I sat and watched in quiet admiration as Stu and Jon sat on the sofa in front of me performing an impromptu acoustic and instrumental rendition of one of the new songs. It was just the sound of guitar strings, no amplification, and a bit of foot tapping, but it was a delight to witness. Stew asked me if I'd been told the album title yet. "No, I haven't" I replied. Then silence. A few exchanged glances between them, a cough, then a change of subject. Hmmm, not ready to tell me yet I decided. It was time for the band to move from their dressing room to the wings of the stage. I stood on the side of the stage with Jon and Stew, next to Trevour's monitor desk, and chatted as they waited for show time. Again Stew broached the subject, "We can tell Dave the title can't we?" he said. "Yeah I think so" agreed Jon. "Ok," continued Stew, "the new album is called..." 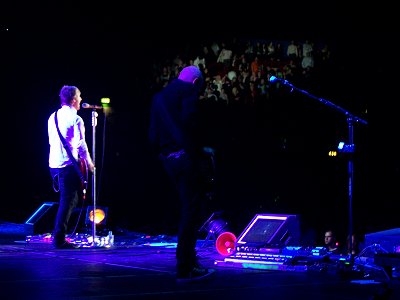 I remember a few years ago getting a phone call from Jon Brown, head of the band's Fierce Distribution label. He was phoning me to tell me about the then forthcoming album, The Mission Bell. I was walking along a main road at the time, traffic thundering passed me, and I had to ask JB to repeat the album title three times before I could actually hear what he said over the noise of the traffic. "The Mission what??" I kept asking. It was an embarrassing moment, and the fear of the same thing happening again this time meant that I lent in close to Stew as he revealed the new album title to me as we stood on the NEC Arena stage. It's still a secret at the moment, a point Jon reinforced to me by standing on my foot as Stew told me, but I think they'll be announcing it on their new website in a few days. So stay tuned for that. 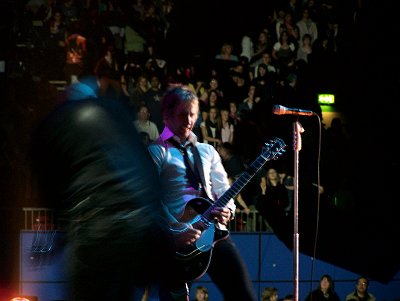 Finally it was time for Delirious? to start their set. I spent the first half of the show still stood by the monitors desk, getting a good view of the stage and Arena. God TV were doing an impressive job of covering the event. One cameraman spent his time moving between Jon and Stew on stage, poking his shoulder holstered camera through the cymbals or to within inches of Jon's bass strings. Another camera operator did the same on the opposite side of the stage with Stu and Tim. In the 'pit' between stage and crowd, a camera whizzed from one side of the stage to the other, pushed along on a trolley at break neck speeds. Another camera soared above the heads of the crowd on a crane positioned in the pit. From where I was stood at the side of the stage I could just make out a further 2 cameras on tripods near the back of the arena by the sound desk, another at the very back on a trolley and a further one in the seating on one side of the crowd. Clearly every available angle was covered. It made for a few 'interesting' moments where Stu nearly sent a camera operator flying when he dared to get a little too close during a guitar solo, and another moment where a photographer nearly got flattened in the pit by the 100mph camera trolley operator. 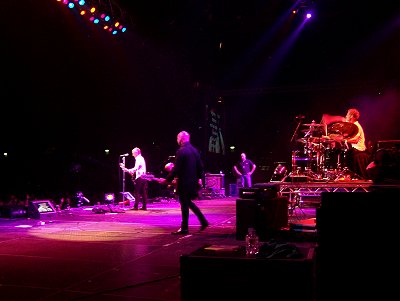 Deciding it was time to get a different angle myself, I headed to the back of the venue to enjoy the view of the stage's light show in full. As the final song of the main set ended, I met up with the band as they came off stage and chatted some more as we hung around behind the stage while the 'talky bit' happened. There was some debate involving tour manager Ian Cattle about how many songs they were coming back on stage to perform at the end. Originally they'd planned to end with God Is Smiling, but the event was running ahead of schedule, and with a live TV broadcast to fill Delirious? were given a 2 song ending slot instead. So Investigate was quickly chosen as the extra song, and before long the band were back on stage to perform the end of their set. 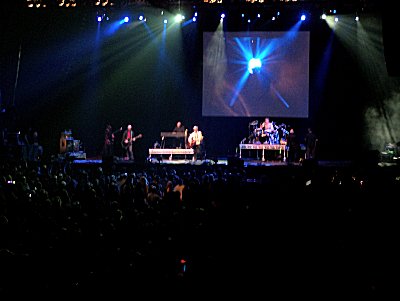 For the final two songs I watched from the other side of the stage, the side where Stu stands. Watching Stu play the Investigate guitar solo at close proximity was stunning. He was absolutely on fire, even Martin was stood there open mouthed watching Stu rocking away into his own little world. (Back in the dressing room later on Stu complained that his fingers were sore - can't imagine why!) As Investigate ended the band linked arms and bowed, before leaving the stage. I joined them back in the dressing room where Jon pulled out his laptop and handed me a set of headphones and let me listen to the title track from the new album. Apparently it's a good representation of the theme of the album. Needless to say I loved the track. It starts with a simple drum machine beat with a steady tempo, then two thirds of the way through the drums kick in and the song starts to soar. I politely declined the opportunity to join them for dinner, and instead said goodbye and left to try and find my car in the labyrinth that is the NEC car park.