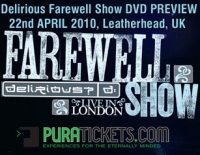 Delirious? will be celebrating the release of their final DVD release, 'Farewell Show', with a special launch event in Surrey on Thursday 22nd April 2010. The new live album was recorded in High Definition on the night of the band's final ever gig last November at London's Hammersmith Apollo, and is being released on double-CD, DVD and BluRay on 19th April in the UK and 18th May in the USA.

The 85 minute film of the concert will be shown for one night only in The Theatre, an independent cinema in Leatherhead, Surrey UK, that dates back to Victorian times. With big screen and full surround sound to help recreate the power of the gig itself, the one-off event will begin with a short talk from the band's lead singer Martin Smith. A limited supply of only 300 tickets are available for the screening, available from www.Purashop.com.

Delirious? fans in the UK are currently making an attempt to get the band's famous anthem, 'History Maker' into the charts for Easter. The song has been released as a download single in the UK this week, following a huge Facebook campaign which has seen more than 46,000 fans sign up. Two versions of 'History Maker' are available, the original studio version and a live version recorded at the last ever Delirious? concert. Both tracks cost 79p and are available now on the UK iTunes store (see links below) where they will both count towards a potential chart position. Fans are urged to download the single between 28th March and 3rd April 2010 and Delirious have said they will donate their proceeds from the singles to the CompassionArt charity, to be shared among projects working around the world.